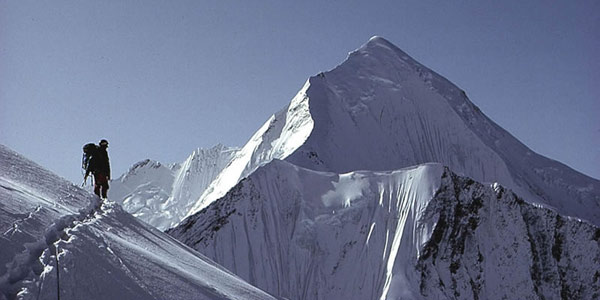 The first time Stephen roped up for a climb was in the Swiss Alps in 1967. For him the Alps are home, and he has climbed and skied there nearly every year of his life.  However, like most ambitious mountaineers, he was always keen to explore further afield and in 1977 he made his first expedition outside Europe, to the Afghan Hindu Kush. That expedition – pioneering new routes up little-known mountains – set the tone for all his future expeditioning and even when he climbed Everest it was by a new route up the mountain’s biggest, least known face. 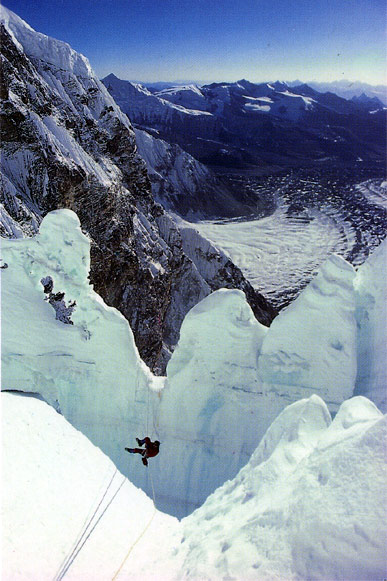 Most of Stephen’s past expeditions have been to the mountains of Central Asia, but he has also climbed in Peru, Bolivia, Chile, South Georgia, Southern Africa and East Africa. Over the years he has enjoyed climbing with some of the world’s finest exploratory mountaineers, including Harish Kapadia, Chris Bonington, Ed Webster, John Roskelley, Jim Wickwire, Dick Renshaw, Tim Macartney-Snape, Conrad Anker and Reinhold Messner.

Looking to the future, he is now taking bookings for the next collaboration with Pelagic Expeditions – the 4 Jan to 1 Feb 2018 Antarctica expedition.

There are still places available for both hard core ski mountaineers and for people who might prefer just to come for some gentler wildlife watching, sea kayaking and sailing. Details here >>

Above: Ed Webster on his Tyrolean traverse over the Jaws of Doom, Everest Kangshung Face © Stephen Venables

Have a look at this video glimpse of recent trips (2013 and 2016) to the Antarctic Peninsula.
https://www.youtube.com/watch?v=ajR6CmkZZ8E